Why use mineral supplements?

Why do we need minerals?
The importance of minerals for the optimal maintenance of health and performance in livestock is crucial and deficiencies can lead to general disorders. Minerals perform very complex functions to the animal’s metabolism.
Accelerated developments in animal and plant genetics, coupled with a significant increase in the use of artificial fertilizers and animal slurry, have all contributed to a greater gap between the animal’s requirement for supplementary elements and the level at which the current base diet can supply. The consequence of these positive developments is that there is now greater pressure on the diet of the animal to fulfil the macro, trace element and vitamin requirements of the modern day high producing animals. It can be assumed that the base diet is no longer capable of fulfilling these needs without supplementation. The shortfall is further compounded by the increasing levels of mineral antagonists which are now appearing in forages and rations. 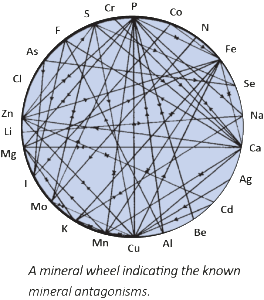 Secondary mineral deficiencies are now much more prominent in modern livestock operations. These deficiencies develop when one or more other third party elements bind with the key minerals in the rumen thus rendering them mostly unavailable to the host animal.

These third party elements are referred to as antagonists. Where this situation occurs we experience high mineral loss rates as they pass through the animal unabsorbed and ultimately being excreted in the manure. All of this results in more expense for the producer and an inadequate amount of minerals reaching the mineral storage points within the animal.

Are all trace minerals the same?
To address the difficult discussion about physiology, intestinal health and environmental pollution, the supply of trace minerals in the EU is regulated by law (EU Regulation 1334/2003). The maximum concentrations in feed have been significantly lowered over the years to reduce the heavy metal output in the environment. This background and the antagonistic threat has meant that the focus of mineral mixture assembly has switched from the crude level of each element supplied to the ‘bioavailability’ of the element. i.e the percentage of the amount fed to the animal which is actually retained by the animal.

Traditionally, trace minerals have been categorised as either organic or inorganic. The inorganic segment generally relates to each elements being presented in its own original natural form. ‘Organic’ means that the trace mineral is purposely bound when manufactured to another third party element which may be an amino acid, a proteinate, a polysaccharide complex or propionates. Although both organic and inorganic forms of trace minerals are used in livestock diets, important differences exist in the bioavailability of the two forms with independent research proving numerous times that the organic trace element ensure far superior absorption by the animal, especially in the presence of antagonists.

Agritech, through the Welmin™ range of mineral supplements, have been at the forefront in addressing this ‘bioavailability’ challenge. Since the early 1990’s we have been tackling this complex problem. We quickly identified that for maximum bioavailability of each element that it must be highly insoluble in the rumen.
At that time Keylate™ organic minerals were independently proven to be superior to all others in this regard with excellent absorption rates. We have continued this relationship right up to today through our inclusion of the now further improved Keyshure™ organic range of trace minerals in all of our mineral supplements.

We now also include Intellibond C in many of our mineral mixtures. 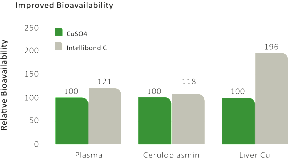 It is now widely accepted that the inclusion of elements from multiple sources significantly enhances the absorption of each element. Agritech have embraced this superior approach, with many elements included from more than one source. 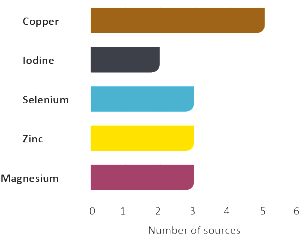 Agritech continue to adopt best practises to ensure maximum absorption by the animal. Following extensive research from around the world the Welmin™ range of minerals has become a proven formula supplying the ultimate in terms of mineral, vitamins and other beneficial supplements.

Browse our website to read more about our livestock mineral supplements or download the Agritech Mineral Supplements Brochure (3MB).