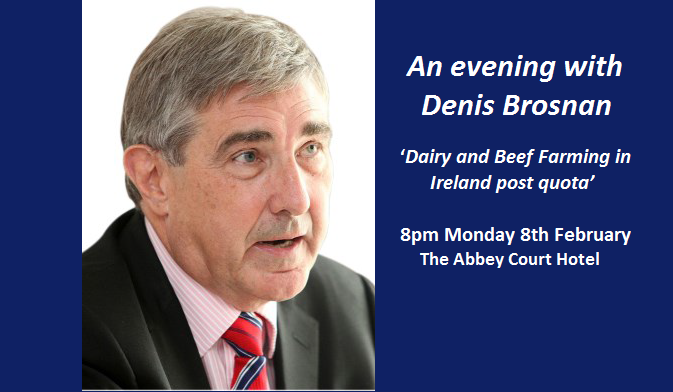 Agritech are proud to be sponsoring a presentation by Denis Brosnan on ‘Dairy and Beef Farming in Ireland post quota’. The event is organised by the The North Tipperary Foxhounds and is part of a series of meetings organised by them for local farmers. It will take place at the Abbey Court Hotel, Nenagh on February 8th at 8pm.

Denis Brosnan is one of the most successful people in the Irish agri-food industry, well known in agricultural circles for establishing the Kerry Group and transforming its fortunes from a dairy co-op into one of the world’s biggest food product suppliers.

He was educated at St. Brendan’s College, Killarney before attending University College Cork where he completed a Master’s Degree in Dairy Science. Denis has since been awarded a Doctorate in Business (Irish National University and International Management Centre). His early career began in London, returning to Ireland in 1972, established Kerry Co-op and then the Kerry Group plc in 1986. In 2001, he stepped down as Managing Director of Kerry Group plc, and then as Chairman in 2003.

Mr Brosnan was appointed by the Irish Government for chairperson positions with organisations including Mid-West Task Force, Limerick Local Government Committee, Horse Racing Ireland and recently, the Limerick Reorganisation Implementation Group. He has also been chairman of the Grove Care Companies in the UK since 1993 and of the Lydian Care Companies in the UK and US since 2003, but has since retired from these companies. He lives and runs a stud farm at Croom, Co Limerick with his wife Joan, and continues to produce world champion racehorses such as Zoffany, Maybe and Damson.